The Scotiabank Arena (formally known as the Air Canada Centre) is located in downtown Toronto, Canada, and is home to the NBA’s Toronto Raptors and the NHL’s Toronto Maple Leafs. Its sponsor, The Bank of Nova Scotia, operating as Scotiabank, is a Canadian multinational banking and financial services company headquartered in Toronto, Ontario.

The Scotiabank Arena was built as a replacement facility to the Roger Centre; the arena didn’t officially break ground until March of 1997 and wasn’t finished until February of 1999.

After purchasing the Raptors and the Air Canada Centre, the new owners entered into a contract with PCL Construction to finish the arena in 24-months by March 1st, 1999. Implementing the Maple Leafs into the new facility would result in a 25% increase in construction costs (over $25 million CAD). The completed design included a 15-story tower (reduced from a proposed 30-stories), four restaurants, and an underground parking lot.

The Air Canada Centre was later rebranded to Scotiabank Arena in July of 2018. The 20-year sponsorship agreement between Maple Leaf Sports & Entertainment and Scotiabank is worth about CAD $800 million. This is estimated to be the highest-priced annual building and team sponsorship in North American sports history. 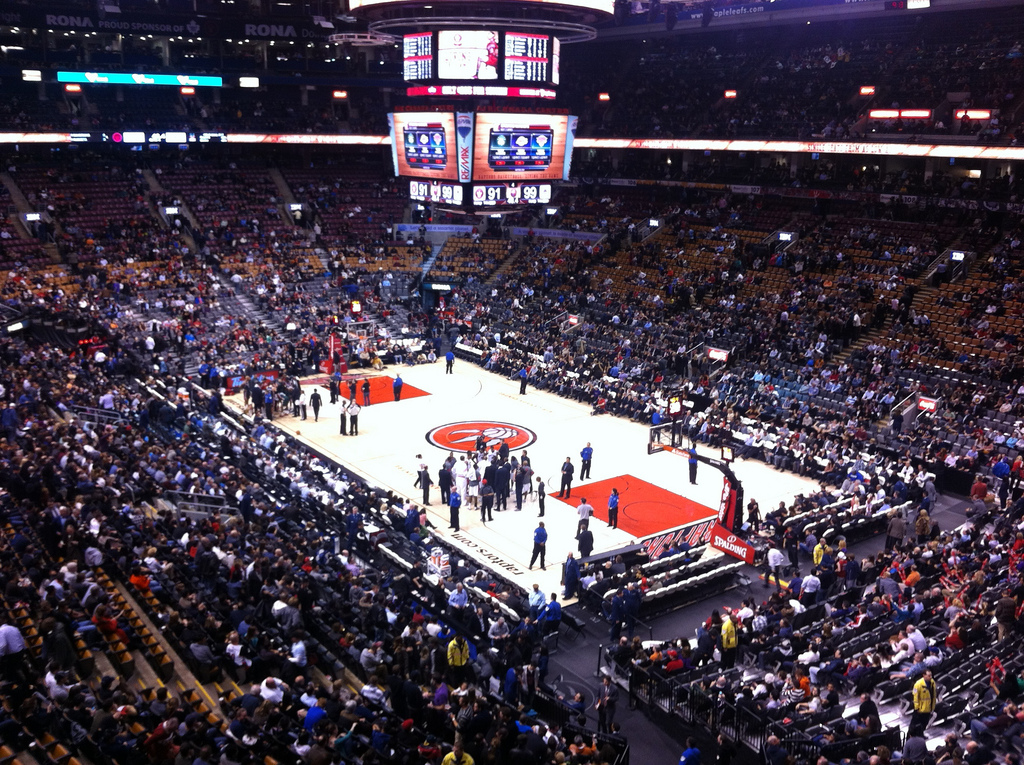 Below is a seating plan of Toronto Raptors's Scotiabank Arena:

Several popular bars are located within walking distance to the arena, with a few of the favorites being Miller Tavern, The Fox, Kellys Landing, Lucky Clover Irish Sports Pub, and Real Sports. Conveniently located beside Scotia Bank Arena in the heart of Toronto’s sports and entertainment district, Real Sports caters to sports fans as much as music and entertainment fans. With a new, modern design featuring premium styles and materials, an upscale menu offering hand-selected, local and seasonal ingredients, and a new atmosphere, Real Sports is a unique take on the traditional sports bar.

While several of the bars and pubs in the area offer several food options, a few other food options are a favorite of the locals and are right around the arena that you can stop at before tip-off. Some of the area’s choices include The Butcher Chef, Miku Toronto, Hot Stove Club, Aria, Miller Tavern, and many more. Since the Raptors are very popular in the area, there are several spots near the Scotiabank Arena that are sports-themed and will be great places to catch a bite to eat before the game or even watch the game while you eat.

The Scotiabank Arena does not currently offer tours open to the public.

Typically, Raptors tickets vary on who they are playing on the given night, but tickets can be found for as low as $26, with an average price of $110. The Scotiabank Arena also offers a wide range of premium seating options, including the Platinum Club Seats, Scotia Club Combo Seats, and the MasterCard Club Courtside. The Scotiabank Arena has a wide range of tickets scaling all ticket prices, so you will be able to find any seat in the building that caters to your taste.

Since the Scotiabank Arena is located near the heart of Toronto, there are several travel options you can choose from. The most popular transportation methods would include the TTC (The Toronto Transit Commission), which operates the subway, streetcar, and bus. There are also various forms of care services and thousands of parking spots if you chose to bring your vehicle.

The address for the Scotiabank Arena is as follows:
• 40 Bay St, Toronto, ON M5J 2X2, Canada

While traffic during game nights will drive larger crowds than usual down to Toronto, you should be in the clear of heavy traffic if you leave a few hours before tip-off. If you are coming from surrounding suburbs, you will most likely be coming into the city on a major highway then transitioning into city street driving.

While there are public/paid parking options on any given game night, the arena has two parking levels beneath the building, which are used for private suite holders and office tenants. There are also thousands of lots and spaces located within a couple of minutes walk of the arena.

If you are coming from out of state and flying, you will most likely fly into Toronto Pearson International Airport. The drive from the airport to the arena is 12 miles and will roughly take 25-40 minutes to reach the arena. The most popular transportation methods to the Scotiabank Arena are by train ($4-$10), bus ($9), taxi ($45-$70), or car.