The Bankers Life Fieldhouse is located in downtown Indianapolis, Indiana, and is home to the NBA’s Indiana Pacers and will be the future home of the WNBA’s Indiana Fever. Its sponsor, Bankers Life, is the primary subsidiary of CNO Financial Group, Inc.

The Bankers Life Fieldhouse was built as a replacement facility to the Market Square Arena; the arena didn’t officially break ground until July of 1997 and wasn’t finished until November of 1999.

In April of 2019, the Fieldhouse underwent a significant renovation. The $360 million projects were approved by the Marion County Capital Improvement Board and included:
• A new outdoor entry plaza.
• A new indoor gathering location.
• Various interior improvements.
As part of the renovation plan, the Pacers committed to staying in Indianapolis for the next 25 years. Construction was set in two phases, with the 2021 NBA All-Star Game being the middle of the two stages, which was ultimately canceled due to COVID-19. Almost all of the construction work will occur during Pacers’ offseasons and will force the Fever to relocate for the time being. 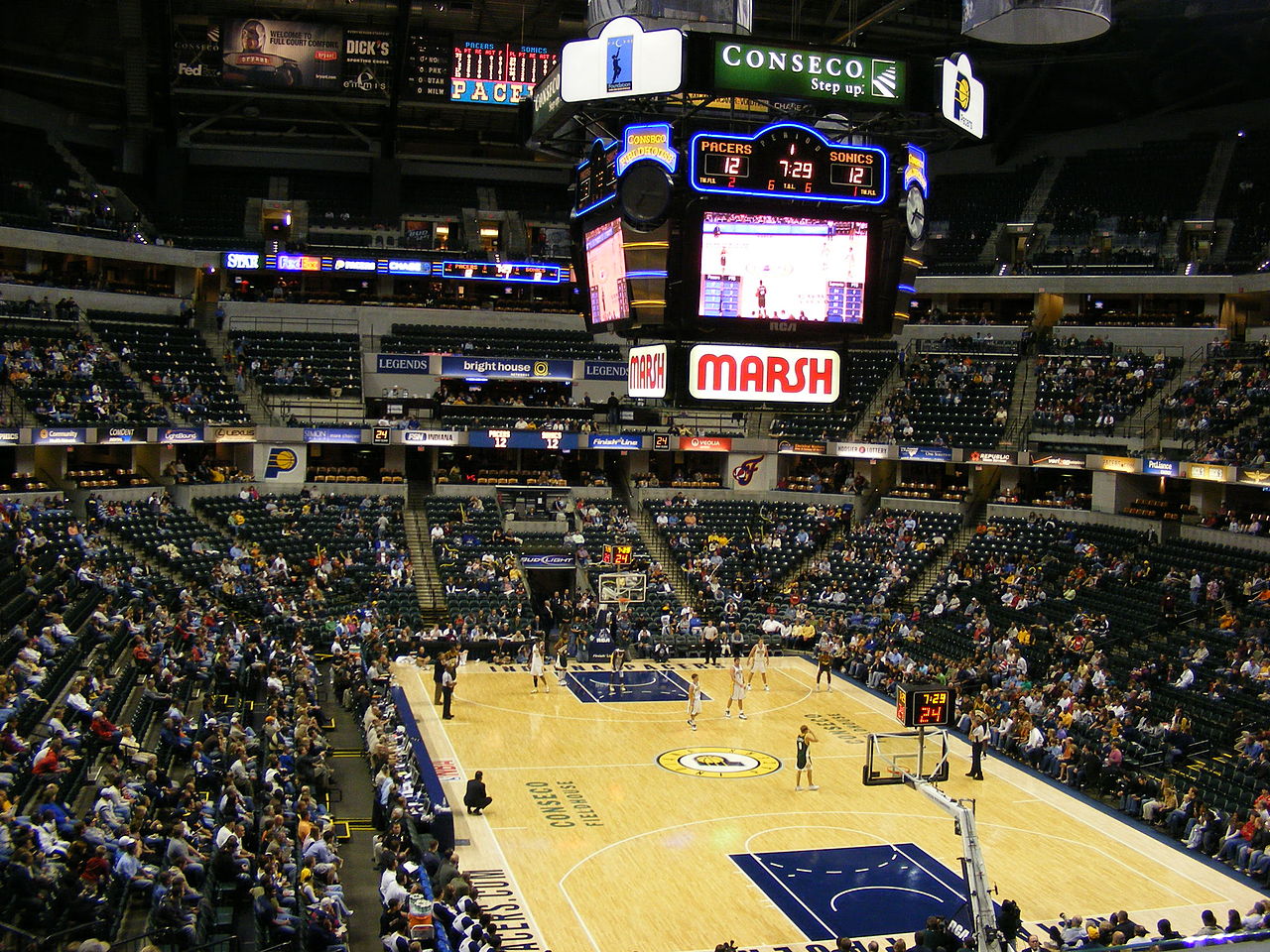 Below is a seating plan of Indiana Pacers's Bankers Life Fieldhouse:

There are several popular bars located within walking distance to the arena, with a few of the favorites being Kilroy’s, O’Reilly’s Irish Bar & Restaurant, SOS Pub Indianapolis, The District Tap, and many others. Since Indiana is crazy about basketball, there are several spots near the Toyota Center that are sports-themed and will be great places to catch a bite to eat before the game or even watch the game while you eat.

Several popular bars are located within walking distance to the arena, with a few of the favorites being Kilroy’s Bar & Grill, Pier 48 Fish House & Oyster Bar, Prime 47- Indy’s Steakhouse, and Nada. Nada reimagines Latin American cuisine with desirable twists on the classics and dishes inspired by food worldwide. The menu includes tacos, short courses, and more, with a menu designed for sharing with friends or getting a taste of a few different options on your own. With fantastic appetizers, house margaritas, craft cocktails, and wine, this is a fun atmosphere to grab food and a drink before a Pacers game.

Groups of 15 or more can schedule a tour of the Bankers Life Fieldhouse. On this tour, you will learn all about Indiana’s proud basketball history and get a behind-the-scenes look inside the 750,000-square-foot facility that hosts the Pacers as well as the Fever.

Typically, Pacers tickets vary on who they are playing on the given night, but tickets can be found for as low as $10, with an average price of $89.

One of the premium seating options that the Bankers Life Fieldhouse offers is the Lexus Loft. The Loft is a new and unique premium seating experience located on the south end of the Krieg DeVault Club Level. The Lexus Loftis a combination of 4-seat Loge and Theater Boxes and offers access to an all-inclusive club and hospitality space for Pacers and Fever games as well as select Bankers Life Fieldhouse events.

Since the Bankers Life Fieldhouse is located near the heart of Indianapolis, there are several travel options you can choose from. The most popular transportation methods would include The Indianapolis Public Transportation Corporation, popularly called IndyGo, the city’s public bus transit system; there are also various forms of care services and thousands of parking spots to bring your vehicle.

The address for the Bankers Life Fieldhouse is as follows:
• 125 S Pennsylvania St, Indianapolis, IN 46204

While traffic during game nights will drive larger crowds than usual down to Indianapolis, you should be in the clear of heavy traffic if you leave a few hours before tip-off. If you are coming from surrounding suburbs, you will most likely be coming into the city on a major highway then transitioning into city street driving.

While there are public/paid parking options on any given game night, the most convenient parking location is the Virginia Avenue Parking Garage. This garage is a 2,200 space garage that connects to the stadium by a walkway over Delaware Street. Price varies day today, but the standard event rate is $15 for a covered space and $6 for a rooftop space.

For public transportation, you are most likely looking to be on The Indianapolis Public Transportation Corporation, popularly called IndyGo, the city’s public bus transit system; there are also various forms of care services and thousands of parking spots if you chose to bring your vehicle.

If you are coming from out of state and flying, you will most likely fly into the Indianapolis International Airport. The drive from the airport to the arena is 13.6 miles and will roughly take 25-40 minutes to reach the arena. The most popular transportation methods to the Bankers Life Fieldhouse are bus ($3-$13), taxi ($35-$50), or car.