The Rocket Mortgage Fieldhouse, formally known as the Pepsi Center, is located in Denver, Colorado, and home to the NBA’s Denver Nuggets, NHL’s Colorado Avalanche, and the NLL’s Colorado Mammoth. It is named after its sponsor, Ball Corporation, which is the world’s leading provider of innovative, sustainable aluminum packaging for beverage, personal care, and household products.

The American Airlines Center was built as a replacement facility to the McNichols Sports Arena; the arena didn’t officially break ground until November of 1997 and wasn’t finished until October of 1999.

On top of the new arena, the construction included a basketball practice facility making the arena one of the very few sports venues in North America that provides a separate practice facility for its team within the building.

As well as the arena itself, the construction added the Breckenridge Brewery Mountain House, which is a restaurant accessible from within and outside the arena itself. The entrance includes an atrium suspended and features a sculpture depicting various hockey and basketball athletes in action poses. Before the 2013–14 season, the previous octagon-shaped scoreboard that had been in use since the arena opened was replaced with a new four-sided rectangular scoreboard.

The deal makes them the exclusive “sustainability partner” as part of the naming rights agreement. All Kroenke Sports & Entertainment-owned sports teams and venues will employ recyclable aluminum products provided by Ball to reduce plastic waste, with Ball Arena to transition to serving concessions in aluminum packaging by 2022. 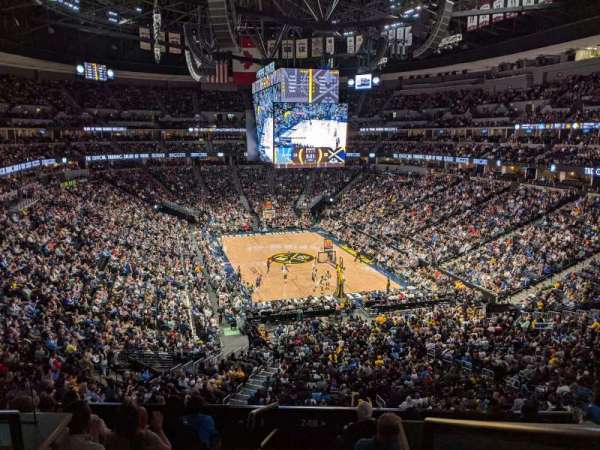 Below is a seating plan of Denver Nuggets's Ball Arena:

Several popular bars are located within walking distance to the arena, with a few of the favorites being Society Sports and Spirits, Roosevelt, My Brother’s Bar, and 54Thirty. Located on the top of the 20th floor of Le Meridien Denver Downtown, 54thirty is Denver’s highest rooftop bar at 5,430 feet above sea level. They offer crafted cocktails and small plates while having a fantastic view of the downtown skyline and the Rocky Mountains. With several bars within walking distance to the Ball Arena, you will have several places you can stop at before tip-off or even watch the game while having a drink.

While several of the bars and pubs in the area offer several food options, a few other food options are a favorite of the locals and are right around the arena that you can stop at before tip-off. Some of the local favorites include ChoLon Modern Asian, The Kitchen American Bistro, Euclid Hall, Avelina, and Tavernetta. Since Denver is a very popular sports city, there are several spots near the united center that are sports-themed and will be great places to catch a bite to eat before the game or even watch the game while you eat.

The Ball Center tour allows the public to go behind the scenes and see the sports industry’s operations side. Then the tour leads you to the event level, where you will visit the press box, luxury suites, and several other locations in the arena.

Please note that since the facility hosts several events weekly, the floor will look different depending on the occasion; tours are expected to start at 10:00 a.m., 12:00 p.m., 2:00 p.m. and are based on availability.

Typically, Nuggets tickets vary on who they are playing on the given night, but tickets can be found for as low as $19, with an average price of $102.

One of the premium seating options the arena offers is the Club Level. With several dining options and event space, the Club Level gives you exclusive access to the Land Rover Denver Club and Peak Pub House, along with several other premium amenities.

Since Ball Arena is located near the heart of Denver, there are several travel options you can choose from. The most popular transportation methods would include RTD (Regional Transportation District), which has busses, rails, and light rail transit that provides service to Denver, various forms of car services, and thousands of parking spots if you chose to bring your vehicle.

While traffic during game nights will drive larger crowds than usual down to Denver, you should be in the clear of heavy traffic if you leave a few hours before tip-off. If you are coming from surrounding suburbs, you will most likely be coming into the city on a major highway then transitioning into city street driving.

While there are public/paid parking options on any given game night, the lots that the Ball Arena Sponsors are Toyota Camry Lot, Toyota Prius Lot, Toyota Tundra Lot, Elitch’s Lot, Toyota Rav4 Lot, and Valet Parking. While the arena sponsors many lots, there are thousands of paid-for parking spaces within walking distance of the arena.

You are most likely looking to be on The RTD (Regional Transportation District) for public transportation, which is in Denver’s public bus and light rail system. The RTD has over 170 bus routes, nine rail lines. Lines W, C, and E run to the Ball Arena.

If you are coming from out of state and flying, you will most likely fly into Denver International Airport. The drive from the airport to the arena is 25 miles and will roughly take 40-70 minutes to reach the arena. The most popular transportation methods to the Ball Arena are by bus ($14-$16), train ($11), taxi ($60-$80), or car.