The Smoothie King Center is located in New Orleans, Louisiana, and is home to the NBA’s New Orleans Pelicans. Its sponsor, Smoothie King Franchises Inc., is an American privately held smoothie company that focuses on whole and real ingredients.

The Smoothie King Center was the Pelicans’ first home arena after the team relocated from Charlotte; the arena didn’t officially break ground until November of 1995 and wasn’t finished until October of 1999 and cost $114 million.

The ECHL’s New Orleans Brass was the original tenant of the facility. When the New Orleans Hornets came to the city in 2002, they convinced the state government to force the Brass to finance the conversion between basketball and hockey configurations. That expense was more than the Brass were willing to pay, and they were forced to fold due to not finding a suitable replacement facility.

Following Hurricane Katrina in August of 2005, medical operations previously in the Superdome were moved to the Arena. The Superdome has faced severe structural damage and could no longer house these operations. The Arena’s design was tested in 1996 by a wind engineering firm, so it fared far better than the Superdome during the storm.

In 2013, the arena underwent a significant remodel. These renovations were primarily focused on the gameday experience on the inside of the arena. The main upgrades included updates to the suites and club level, new loge boxes, and a new party deck. In September and October of 2014, major exterior renovations were made to the arena, including new entrances and a new exterior LED lighting system. 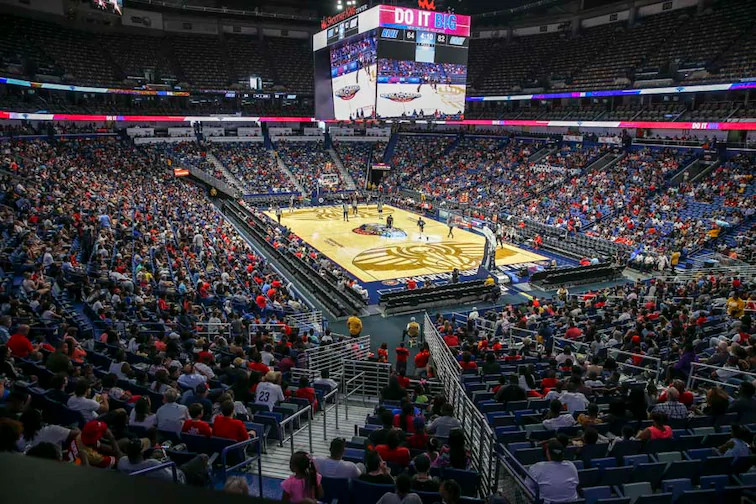 Below is a seating plan of New Orleans Pelicans's Smoothie King Center:

Several popular bars are located within walking distance to the arena, with a few of the favorites being Kerry Irish Pub, Vitascope Hall, Monkey Board, and The Avenue Pub. The Avenue Pub is located in the historic Lower Garden District of New Orleans, a short streetcar ride to the Central Business District and the French Quarter. They are open 24 hours a day, 365 days a year; this is the place to get a great selection of tap beers that they keep a fresh rotation of.

While several of the bars and pubs in the area offer several food options, a few other food options are a favorite of the locals and are right around the arena that you can stop at before tip-off. Some of the local favorites include Smoothie King, Sorella5, Borgne, 8 Block | Kitchen & Bar, Willa Jean, Maypop, Johnny Sánchez, and many others. New Orleans is a city that has a rich history, and with it being near the coast, there are several excellent seafood spots scattered around the city.

The Smoothie King Center does not currently offer public tours.

Typically, Pelicans tickets vary on who they are playing on the given night, but tickets can be found for as low as $10, with an average price of $48. Some of the premium seating options include Mini-Suites, Loge Boxes, Sideline Club Seats, Lower Theater Box. There are several great seating options in the arena. However, most of them have a minimum of 2 people with a maximum of 6 people; they are still great options with fantastic amenities.

Since the Smoothie King Center is located near the heart of New Orleans, there are several travel options you can choose from. The most popular transportation methods would include NORTA (New Orleans Regional Transit Authority), which operates buses, streetcars, ferries, and Paratransit services within Orleans Parish. There are various car services and thousands of parking spots if you chose to bring your vehicle. However, the city is very compact, so it is a great city that allows you to walk to most locations.

While traffic during game nights will drive larger crowds than usual down to New Orleans, you should be in the clear of heavy traffic if you leave a few hours before tip-off. If you are coming from surrounding suburbs, you will most likely be coming into the city on one of the three major highways (I-55, I-10, I-12, and I-59).

While there are public/paid parking options on any given game night, the Smoothie King Center sponsors a wide range of parking locations that include seven parking garages for public parking and two surface lots, which can hold close to 7,000 vehicles.

For public transportation, you are most likely looking to be on the NORTA (New Orleans Regional Transit Authority), which operates buses, streetcars, ferries, and Paratransit services within Orleans Parish. Although the city is very close and compact, walking is often the most comfortable and most reliable transportation in New Orleans.

If you are coming from out of state and flying, you will most likely fly into Louis Armstrong New Orleans International Airport. The drive from the airport to the arena is 11.8 miles and will roughly take 25-40 minutes to reach the arena. The most popular transportation methods to the Smoothie King Center are bus ($2), taxi ($20-$35), or car.