The Toyota Center is located in Philadelphia, Pennsylvania, and is home to the NBA’s Philadelphia 76ers, the NHL’s Philadelphia Flyers, and the NCAA’s Villanova Wildcats. Its sponsor, Wells Fargo & Company, is an American financial services company with its corporate headquarters in San Francisco, California, operational headquarters in Manhattan, and offices throughout the United States and overseas.

The Wells Fargo Center was built as a replacement facility to The Spectrum; the arena didn’t officially break ground until September of 1994 and wasn’t finished until August of 1996 with a cost of $210 million that was largely privately financed.

In August of 2006, the original scoreboard was replaced with a more modern one similar to those used around the NHL and NBA. They also added a linear LED display lining the entire arena and installed it between the suite and club levels. Other renovations for the arena’s tenth anniversary included upgrading the suites with more flat-screen HDTVs and changing their ticket provider from Ticketmaster to New Era Tickets, which Comcast Spectacor owns.

The arena committed to further renovations as part of a $265 million “Transformation 2020” enterprise. It debuted a new 4K-resolution scoreboard in September of 2019; the arena also revealed a new premium area for selected ticket holders known as the “Center City Club.” As part of a partnership with Rivers Casino, they added two sportsbook arenas and are open to all visitors, including bar and seating areas, televisions, and odds boards.

The arena also announced the “New City Terrace,” which was a remodel of the standing room area into a 23,000 square foot “Assembly Room” inspired by Independence Hall, with bars and concessions, fireplaces, and community areas. The site is designed to provide a first-class experience at an affordable price, while the arena’s cheapest tickets will access this area. 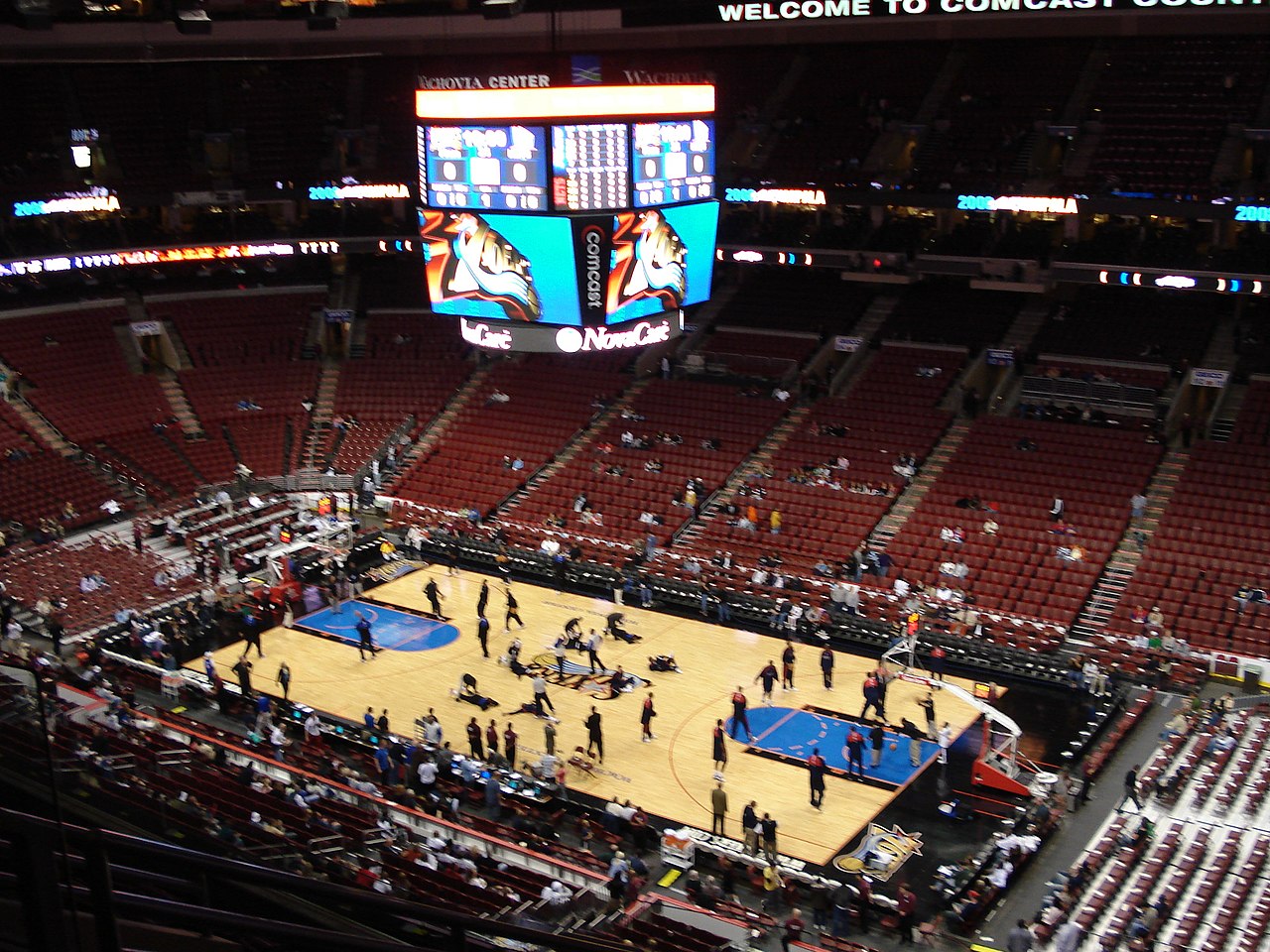 Below is a seating plan of Philadelphia 76ers's Wells Fargo Center:

Several popular bars are located within walking distance to the arena, with a few of the favorites being Chickie’s & Pete’s, Cadillac Grille, Philadium, Popi’s Italian Restaurant, and Chickie’s & Pete’s. The Chickie’s & Pete’s hometown flavor has expanded to 12 locations across Philadelphia and New Jersey and was voted ESPN’s #1 Sports Bar on the East Coast. They also offer happy hour deals with a rotation of specials that vary day to day. If you are looking for a bar that has excellent drinks and is very sports-centric, Chickie & Pete’s is the spot for you.

While several of the bars and pubs in the area offer several food options, a few other food options are a favorite of the locals and are right around the arena that you can stop at before tip-off. Some of the best options in the area include Cadillac Grille, Popi’s Italian Restaurant, Penrose Diner, L’Angolo Ristorante, Scannicchio’s, and many others. Since Philadelphia is a very popular sports city, there are several spots near the united center that are sports-themed and will be great places to catch a bite to eat before the game or even watch the game while you eat.

The Wells Fargo Center tours are the only way to get behind the scenes in one of the world’s busiest sports and entertainment facilities. On this tour, you get to learn about the rich history of Philadelphia Sports & Entertainment and the Wells Fargo Center’s day-to-day operations. Tours are approximately an hour to an hour and a half long, and include a photo and frame for each guest, and will start at the Broad St. Doors. Group tours are available for groups of 25 or more Monday through Friday, from 10:00 a.m. – 3:00 p.m. at a 15% discount.

Typically, 76ers tickets vary on who they are playing on the given night, but tickets can be found for as low as $20, with an average price of $110. The premium seating option at the Wells Fargo Center is the Premium Suites. These suites include 12 seats, standing room for six, four parking passes, premium food and beverage packages, Cadillac Grille access, private restrooms, and full-time concierge and hosting services. Ticket prices vary based on the opponent, and the arena has five tiers of opponents that dictate that price point.

Since the Wells Fargo Center is located near Philadelphia’s heart, there are several travel options you can choose from. The most popular transportation methods would include SEPTA (Southeast Pennsylvania Transportation Authority), an extensive system utilizing buses, rapid transit, commuter rail, trolleys, and the trackless trolley (trolleybus) system. There are also various forms of care services and thousands of parking spots if you chose to bring your vehicle.

While traffic during game nights will drive larger crowds than usual down to Philadelphia, you should be in the clear of heavy traffic if you leave a few hours before tip-off. If you are coming from surrounding suburbs, you will most likely be coming into the city on one of the three major highways (I-95, the Schuylkill Expressway, and Roosevelt Boulevard).

While there are public/paid parking options on any given game night, the Wells Fargo Center has eight parking lots that are brightly lit and patrolled by security personnel throughout the extent of the events. Book parking ahead of time that is steps away from Wells Fargo Center and enjoy the quickest exit to the interstate after the game. You can book your parking space ahead of time on the SpotHero app.

If you are coming from out of state and flying, you will most likely fly into Philadelphia International Airport. The drive from the airport to the arena is 6.1 miles and will roughly take 25-40 minutes to reach the arena. The most popular transportation methods to the Wells Fargo Center are by subway ($15-$20), bus ($6-$8), taxi ($25-$35), or car.