State Farm Arena, formally known as “Philips Arena,” is located in Atlanta, Georgia, and is home to the NBA’s Atlanta Hawks. The arena used to be the home arena for the Atlanta Thrashers before they relocated to Winnipeg and the Atlanta Dream of the WNBA from 2008-2016 and 2019.

While the State Farm arena officially broke ground in June of 1997, it didn’t officially open to the public until 1999. The arena is owned by the Atlanta Fulton County Recreation Authority and operated by the Atlanta Hawks with a final building cost of $213.5 million.

The arena replaced Omni Arena after the Hawks owner, Ted Turner, was determined to bring an NHL team back to Atlanta. The NHL deemed the old arena not a suitable facility to house hockey games. The NHL would grant the city a team if they built a new arena, and this was one of the many reasons why State Farm Arena came into existence.

After Tony Ressler acquired the team and the operating rights to the arena in 2015, he announced the possibility of future renovations/remodeling that would ultimately cost between $150-$250 million. This renovation would rebuild the old suites for a more traditional layout and an overhaul to the entire seating arrangement to create a better viewing experience across the board.

The final renovations included reducing the total number of suites from 90 to 40, new premium seating areas, a new center-hung video board, a new courtside club behind one of the baskets, new dining options, a barbershop, top golf suites, and previous office space that was reconfigured to be a new “fan space.” 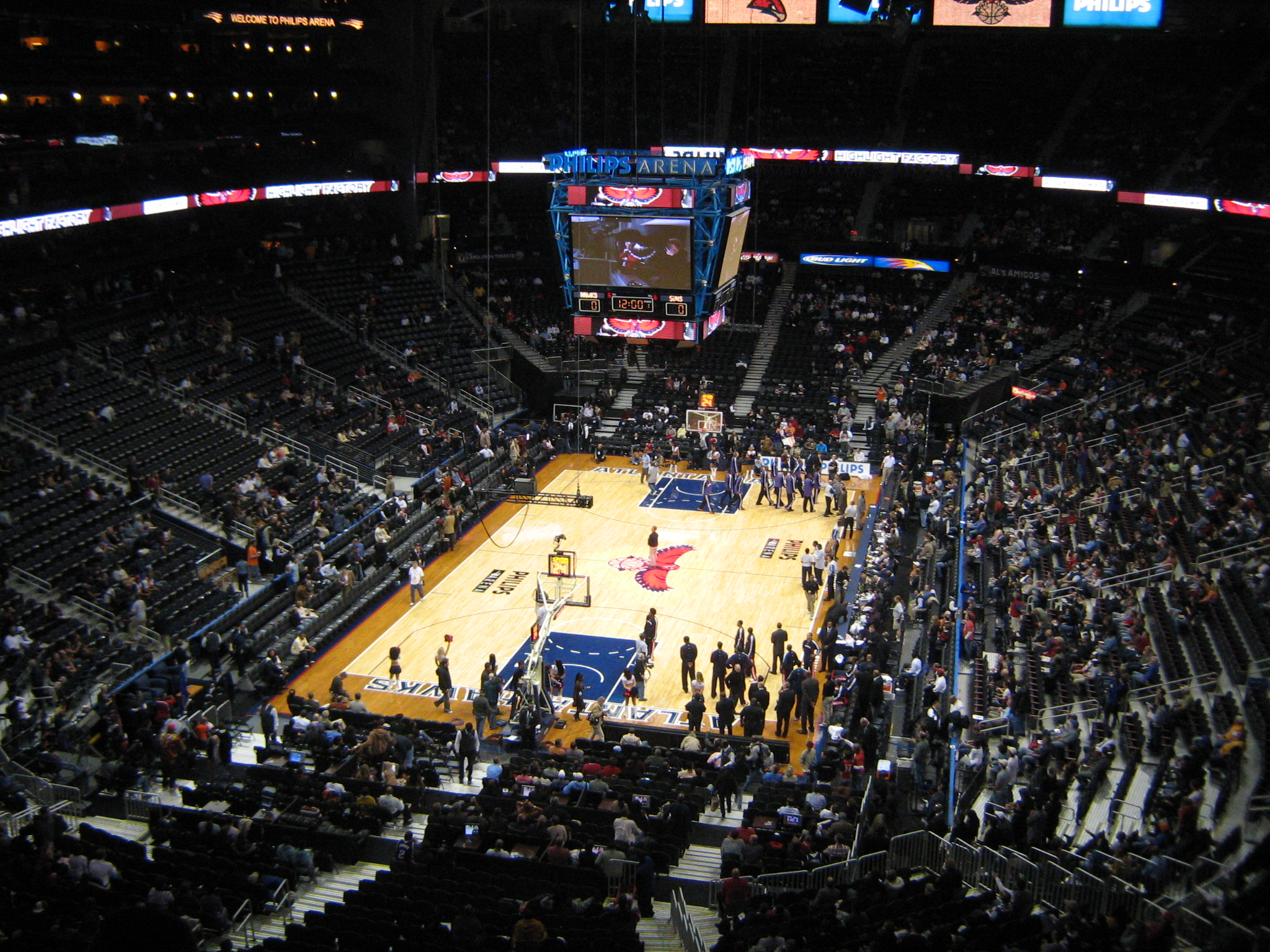 Below is a seating plan of Atlanta Hawks's State Farm Arena:

Several popular bars are located within walking distance to the arena, with a few of the favorites being Park Bar, STATS Brewpub, Thrive, and one of the favorites for tourists being Skylounge. With rave reviews from locals as well as critics, the rooftop lounge on top of the Glenn Hotel offers a fantastic view of the city skyline with a covered roof, has sports on the television, and often provides live music; the Skylounge is a great spot to hit before a game to get a great taste of the nightlife Atlanta has to offer.

While several of the bars and pubs in the area offer several food options, a few other food options are a favorite of the locals and are right around the arena that you can stop at before tip-off. One of the quick and easy spots is the CNN Center Food Court is home to fast-food restaurants from the likes of Chick-Fil-A. Arby’s, Subway, and a couple of options in sit-down restaurants such as Dantanna’s as well as McCormick and Schmick’s. While the CNN Center is a one-stop-shop for food options, other fantastic food options around the arena include Twin Smokers BBQ, Ted’s Montana Grill, BurgerFi, and restaurants included inside the arena walls.

Tours of the arena are available daily on non-event days from 9:00 am to 6:00 pm, and 9:00 am to 5:00 pm on event days. The tours take about one hour, and you get an inside look into the Hawks’ and Thrashers’ locker rooms, the press box as well as the luxury suites. Tickets are free for kids three and under, $4.50 for children 4 to 12, $7 for adults, and $5 for seniors. Before or after your tour, one spot you can visit to enhance your experience would be The Hawk Walk, which connects the CNN Center to the Arena.

Typically, Hawks tickets vary on who they are playing on the given night, but tickets can be found for as low as $12.00, with an average price of $74.00.

Students who provide a valid college ID and military members will receive a student discount at the box office.

Since State Farm Arena is located near the heart of Atlanta, there are several travel options you can choose from. The most popular transportation methods would include MARTA (busses), rental bikes/scooters, various forms of car services from Uber, Lyft, and taxis, as well as thousands of parking spots if you chose to bring your vehicle.

While traffic during game nights will drive larger crowds than usual down to Atlanta, you should be in the clear of heavy traffic if you leave a few hours before tip-off. If you are coming from surrounding suburbs, you will most likely be coming into the city on one of the three major highways ( 20, 75, 85, and Georgia 400).

While there are several public/paid options for parking on any given game night, the lots that State Farm Arena sponsors include the Sapphire Deck, Diamond Deck, and the Ruby Lot. The arena recommends you purchase a parking pass beforehand to allow for a smooth and seamless experience getting into a parking spot. You can buy a pass through ParkMobile before heading to State Farm Arena. You can contact [email protected] if you have any questions or concerns.

For public transportation, you are most likely looking to be on MARTA (Metropolitan Atlanta Rapid Transit Authority.) Which is a network of busses/railways that run the metro area of Atlanta. You can take four transits from the site (Northbound, Southbound, Eastbound, Westbound) with a series of connections that can take you nearly anywhere in the metro area of Atlanta.

If you are coming from out of state and flying, you will most likely fly into the ATL International Airport. The drive from the airport to the arena is 10.9 miles and will roughly take 25-45 minutes to reach the arena. The most popular transportation methods to State Farm Arena are by bus ($8-$13), subway ($3), taxi ($30-$40), or car.