The STAPLES Center is located in downtown Los Angeles, California, and is home to the NBA’s Los Angeles Lakers and the Los Angeles Clippers, the WNBA’s Los Angeles Sparks, and the NHL’s Los Angeles Kings. Its sponsor, Staples Inc., is an American office retail company and its main focus is the sales of office supplies and related products.

The STAPLES Center was built as a replacement facility to The Forum(; the arena didn’t officially break ground until March of 1997 and wasn’t finished until October of 1999.

The arena measures 950,000 square feet of total space, stands 150 feet tall, and has a 94-foot by 200-foot arena floor. The arena caps out capacity at 19,067 for basketball, 18,340 for ice hockey, and roughly 20,000 for concerts or other sporting events. About 65% of the arena’s seating includes 2,500 club seats in the lower bowl. A plaza features statues of famous Los Angeles athletes and broadcasters outside the arena and is called the Star Plaza.

The STAPLES Center saw many months of back and forth negotiating with the real estate developers threatening to pull out altogether on more than one occasion. The main opposition came from the city council, which opposed utilizing public funds to subsidize the proposed project. Finally, the developers and city leaders reached an agreement, and construction broke ground on the new building in 1997 and was opened two years later. It was financed privately for $375 million.

During the summer of 2010, modifications were made to the arena, including renovated locker rooms for the Clippers, Kings, and Lakers and installing a new $10 million video scoreboard replacing the original one that had been in the building since its opening.

Following the death of former Lakers Kobe Bryant in January 2020, several began to call the arena “The House That Kobe Built” because of his 20-year career. 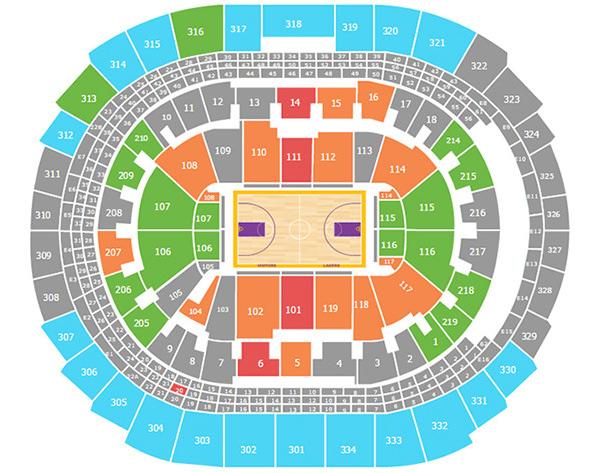 Several popular bars are located within walking distance to the arena, with a few of the favorites being Caña Rum Bar, Prank Bar, Yard House, and Hyde Lounge at STAPLES Center. Hyde Lounge at STAPLES Center combines luxury and class with spectacular views of the city’s best entertainment. The 4,000 square-foot restaurant is host to three bars, ledge seating, a dancehall, and a private room for special events. The bar also has Floating T.V. screens, rosewood walls, and table service that provides a fantastic viewing experience for some of the world’s most outstanding concerts, shows, and sporting events.

While several of the bars and pubs in the area offer several food options, a few other food options are a favorite of the locals and are right around the arena that you can stop at before tip-off. Some of the local favorites include Katsuya L.A. LIVE, Glance Restaurant, Broken Spanish, Fleming’s Prime Steakhouse & Wine Bar, and many more. Since Los Angeles has excellent sports and a very passionate city about the Lakers, there are several spots near the STAPLES Center. However, many are high-end; there are many sports bars and restaurants that are great choices to grab a bite to eat before tip-off.

The STAPLES Center does not offer public tours, but there are a number of STAPLES Center history sections and sports murals located around the arena.

One of few of the STAPLES Center’s premium options includes the San Manuel Club, which includes an exclusive restaurant for all Private Suite, Premier Seat, Premier Tables, and Lounge Ticket Holders to enjoy.

Since the STAPLES Center is located near the heart of Los Angeles, there are several travel options you can choose from. The most popular transportation methods would include one of the country’s best public transportation networks with subways, light-rail, and buses to nearly every corner of the Los Angeles area and various forms of care services and thousands of parking spots if you chose to bring your vehicle.

While traffic during game nights will drive larger crowds than usual down to Los Angeles, it will be nearly impossible to avoid traffic, but if you leave a few hours before tip-off, you should have plenty of time to make it to the arena.

There are 3,300 parking spaces at STAPLES Center-owned lots and garages, and over 10,000 parking spaces are available within a ten-minute walk to the arena. These lots are privately owned and operated, so rates and hours of operation vary.

For public transportation, you are most likely looking to be on the L.A. Metro, which is home to one country’s best public transportation network that includes subways, light-rail, and buses to nearly every corner of the Los Angeles area. This is the preferred method to avoid the hassle of traffic and finding parking throughout your visit.